Who doesn’t love bacon? Bacon is a hard one for many to give up. I have meat loving boys in my house that I work hard to impress with my vegan cooking. This tempeh bacon did the trick. They loved it. I have already been asked to make more.

Vegan bacon is expensive and has many ingredients, my tempeh bacon has just the tempeh and some seasonings in a marinade. It is easy to make and if you want to save some calories you can bake it rather than pan fry (which is actually easier since you can do the whole batch at one time).

The benefits of tempeh are many, here are a few:

You will want to make this the night before so the marinade can work it’s magic. The marinade contains liquid smoke which you can leave out if you want but I highly recommend including it as it gives it that smokiness that we are used to in bacon.

I get my tempeh at Trader Joe’s. It is organic and comes in a 8 ounce package. I was able to get 16 slices out of it. You want to slice it as thin as you can without it crumbling.

Combine all marinade ingredients in a small pot and bring to a boil. Put your slices of tempeh in a shallow baking pan and cover with the marinade. Cover with saran wrap and put in the refrigerator over night- or at least 2 hours. 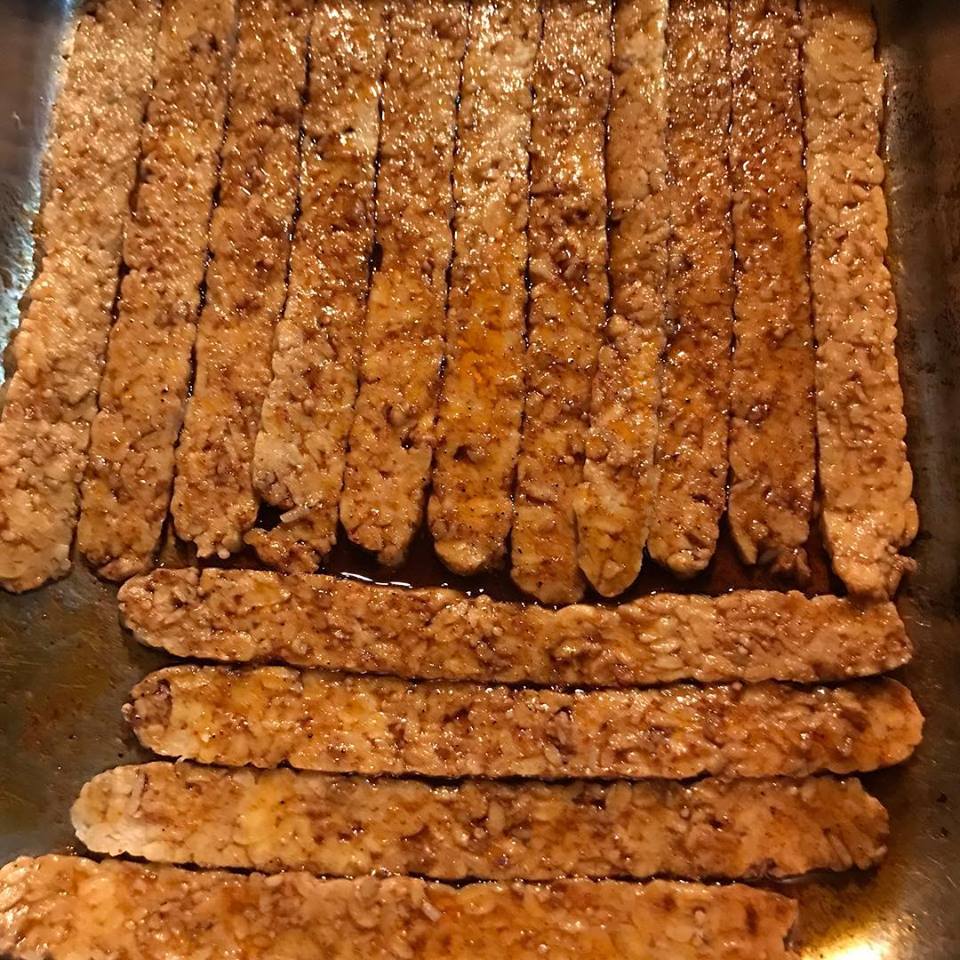 When you are ready to make the bacon, take the pan out of the refrigerator, put the tempeh on a plate that is lined with paper towels and press the side facing up with paper towels. Sprinkle each side with paprika and black pepper.

You can pan fry these in a pan that has been lightly oiled or you can bake at 350 degrees on a pan lined with parchment paper- 10 minutes and then flip over for another 10 minutes- you just want them crispy. If you are baking them you will want to brush each side with olive oil or spray them with olive oil via a Misto Oil sprayer.

I used Dave’s Killer Whole Grain bread, vine ripened tomatoes and romaine lettuce for the sandwich pictured. If you love the bacon as much as we do you may want to make a few batches over the weekend so that you have enough during the week.

Recipe by Raw Chef Debra Garner
To learn more about the raw food/plant based diet and Debra’s services please visit her website. She offers a 6 week raw vegan/plant based coaching program as well as ready made raw vegan creations.

Live with Nikki: Best Exercises and Superfoods for a Trim Waistline

Live with Nikki: How to Stay Healthy During the Holidays

We’ve incorporated inspiration and motivation to help you rock all 7 days. In the next 7 days you will make shifts in your mind and body that will boost your metabolism, improve sleep and increase energy.

This is a self paced reset, so you can start when you are ready but we recommend to continue with the reset each day once you begin to see the maximum results.

All it takes is 7 DAYS. What are you waiting for?

Kaia Tri is a ten-week triathlon training program with workouts three times a week, which is an optional extra during our spring and summer CORE sessions. We swim, bike, and run, with some cross-training classes too. By being able to set a personal pace, our triathlon training program is suited to beginners tackling their first race and intermediate athletes looking to improve their finish time.

Our mock triathlons run several times to familiarize women with the course route. We finish the season with a Triathlon Training Camp which includes paddle boarding and power workouts. The next day is our exhilarating and fun Triathlon race day for all Kaia Tri women to enjoy working out in a beautiful location. Friends are welcome too!

Kaia Sandbag combines traditional fitness with unconventional training methods. With sandbags, the weight shifts and moves in an unpredictable fashion. This piece of equipment is integrated into our conditioning & strength building workouts to simultaneously develop strength, power, endurance, mobility, and balance – with an additional emphasis on developing overall core strength and stability.

New to sandbag training? No problem! Beginners are always welcome.

Need a little extra boost to keep your body guessing? Our TRX/Cardio class is an excellent complement to any Kaia FIT session. TRX workouts, which can be used by anyone at any level, builds true functional strength and improves flexibility, balance and core stability all at once. Mixed with cardio, the classes give every member the perfect balance of challenge and success.

*TRX classes not available in all areas. Please contact us your local studio.

Our trademark Kaia Cross-Training™ classes are a unique mix of cardio, functional movement, and both weighted and non-weighted exercises.

Each day brings a new workout. We have an elite group of advanced coaches who infuse each workout with their own flair and focus, meaning you’re never going to repeat a workout, avoid burn-out, and fitness plateaus.

Keeping the body guessing is key to sculpting lean muscle mass. We also have a 3-part modification foundation: Balance (non-impact); Strength (mid-impact) and Kaia (high impact). Each exercise has its own progression so that everyone can feel successful.

As a part of our program, we also offer nutritional guidance to help you make healthy food choices and keep your fitness on track.

What are you waiting for? Join us today!

Our barre-based class is a unique combination of postures inspired by ballet, yoga, Pilates and Kaia. Using the barre as a prop to balance, you’ll complete a series of isometric holds combined with high reps of small range movements to elongate and tone your major muscle groups.

In addition to the barre, classes incorporate pilates balls, yoga blocks, and/or resistance bands for increased endurance, challenge and focus. Following each set of holds, you’ll rest and recovery with a short series of stretches and poses to increase flexibility prior to advancing.
Kaia Barre is a low-impact class that perfectly complements our program offerings. Meet us at the barre and try your first class for free!

Our dance fitness class is rooted in traditional dance. We use those foundational moves and offer a class that is easy enough for beginners yet challenging enough for the more seasoned dancer. The simplicity of the routines allows you to keep moving with ease. Although this is a workout, it feels more like a dance party with your girlfriends.

Improve your speed, skill, endurance, stamina, and strength with our Kaia running program. The program works on developing running skills that can increase speed, endurance, and overall fitness. The program is designed for you to run at your pace and and help you see improvements every step of the way.

The Kaia training is a simple, progressive program designed for women of all ages and all fitness levels. Whether you are a walker, jogger, or runner, you will be able to join this program and move at your own pace. Research has shown that even 20 to 30 minutes of running (two to three times per week) is enough to help you lose or maintain weight and improve many other important health markers, i.e. your cholesterol, blood pressure and insulin response.

Don’t be intimidated by the Kaia Run program name, each class will have walkers, joggers and runners. Keep in mind that the first mile is the hardest mile you will ever run. Once you get off the starting block, things only get easier. All you have to do is be patient and disciplined in your training, and that is where Kaia

By creating long, lean muscles, Yoga promotes improved coordination, greater flexibility and a fuller range of motion, with a strong body that’s less prone to injury. Yoga keeps the mind centered and reduces stress through positive thoughts and a sense of mindfulness, which also inspires mental strength and confidence.

Yin Yoga, or restorative yoga, is a quiet contemplative practice. It targets the deepest tissues of the body, our connective tissues – ligaments, joints, bones, and the deep fascia networks of the body. Poses are held for 1 minute or more and transitions between poses are gentle and slow. This class is an excellent compliment to our other classes, provides dedicated stretching, and is known to reduce stress and anxiety.

Our BRIK Bootcamp sessions are offered three times a year and are designed to help you reach your health and fitness potential, and you’re welcome to start anytime!

Our BRIK Bootcamps are six weeks long and feature classes daily.* This programming fits in seamlessly with our regularly scheduled classes, and it’s as easy as 1-2-3:

These sessions offer great results in weight and body fat loss and an increase in strength and cardiovascular endurance. Our nutritional support will boost energy, help you de-bloat, increase sleep quality, and enhance your overall glow.

In between BRIK Bootcamp, we offer a variety of classes to meet you at your level! We also have nutrition and fitness challenges, in addition to fun opportunities to spice up your routine. What are you waiting for? Join us today!

Cardio based, calorie torching workout with certified spin instructors. It’s a party on a bike!

WHAT IS KAIA FIT?